First Thanksgiving Meal & No One Died

Thanksgiving was a success!  Well, at least no one got sick! :) We had a total of 6 folks at our house - so the pressure was on for my first time preparing a turkey.  I was obviously a little nervous about the turkey.  Who wants to eat a yucky turkey?  I will give credit where credit is due, I spent hours before hand on the phone with my Mom getting all sorts of Thanksgiving Day recipes and tricks of the trade. Overall, it was a success.  And the turkey, well, by the time that it was done, it was falling of the bones. :) 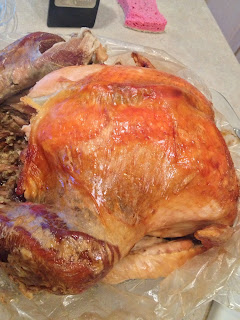 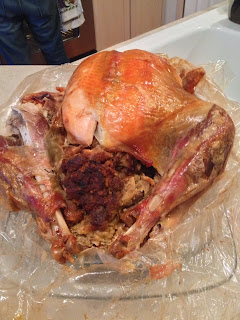 I will tell you, I did steal my recipe for stuffing from my Mama.  She has simply the best, most moist stuffing EVER, so I knew that I needed that recipe!  I made two sides of stuffing, one inside the turkey & one baked in the oven.  Both were good, but the one that was cooked inside the turkey, was a tad moister. The recipe below was enough for both.

Holiday Stuffing
At least a loaf of slightly stale bread (I let it sit open for a day or so - I also used a combination of wheat and white breads)
2 sticks of butter
onion
celery
salt, pepper and poultry seasoning
6 eggs
* 1 can of chicken broth

First I broke the bread into lots of little pieces - just ripping it apart. 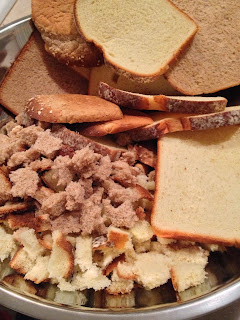 I chopped the onion and celery with my Pampered Chef chopper (man do I love that thing!!) so that it would be in smaller pieces than I could chop myself.
In a skillet, I melted the butter with the onions and celery - until the butter was completely melted and the veggies was slightly soft, but not cooked the whole way through.  Once that was completed, I pored it onto the bread pieces.
This is when I sprinkled the salt, pepper & poultry seasoning (which is the seasoning that my mother swore is what "makes" the stuffing).  There was no set amount, just a large dash of all three.
In went the raw eggs into the mixture.  Using my hands, I mashed it all together, making sure that all of the bread was damp, but not soaking wet.  My hands were kinda gross when it was completed.
Half of the stuffing went into the turkey's caracas and the turkey went right into the oven.  Since the stuffing mixture is a little warm when it is first put together, the turkey should go in the oven right after it is stuffed.
With the remainder of the stuffing, I put it in an oven staff dish and poured a can of chicken broth over it (for moisture).  20-30 minutes before the turkey was done, I put it in the oven, uncovered, at the same temperature as the turkey.  I knew that it was ready when the sides were bubbling and the top was browned.
You could also just half the recipe and prepare the stuffing without the turkey also, but turkey AND stuffing is just a Thanksgiving staple for me.

It turned out pretty well! :) 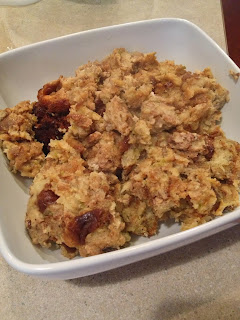