The Start of Something New

Well, again, it has been a few weeks since my last post - but boy have somethings changed!  To all my devoted readers (aka - my mom), I am sorry for not updating this sooner!  Not to leave you hanging, but my boyfriend asked me to marry him on April 27th and I answered with a resounding YES (or so I was told - I don't quite remember what I said in the moment).

Truth be told, I thought that he was going to ask me to marry him the about two weeks before that when we were at the tulip festival.  When that plan didn't happen, I started running through everything in my mind: maybe he isn't in the same place as me, maybe we weren't as serious as I thought, etc.  Needless to say, those thoughts had me in quite a grumpy, uncertain state!  On April 27th, after dinner, he suggested going for a walk through downtown Seattle.  We were just aimlessly walking, or so I thought, and ended up at the waterfront.  Every time that we has walked passed the waterfront, I had mentioned how fun it would be to go on the newly built enclosed ferris wheel that gives a view of the sound and the city.  On this particular walk - my boyfriend suggested that we go for a ride since it was a clear evening.  I excitedly agreed! On the top of the first spin, he bent down on one knee and asked me to marry him, very unexpectedly on my part.  I believe that I just stared at him for a few moments and I do not quite remember if I actually said the word "yes" - he tells me that I did.  After that, I did not pay attention to the rest of the ride. :) 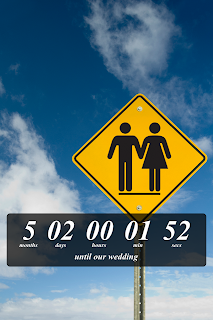 Now for wedding planning!
Posted by Unknown at 5:24 PM